With local competitions in recess, all eyes turn to the National Suncorp Super Netball action. The Melbourne Vixens look like taking full advantage of the Hub with a strong victory over the Sunshine Coast Lightning.

Here’s a report on the game which was held on the 12th of August at the University of the Sunshine Coast Stadium. 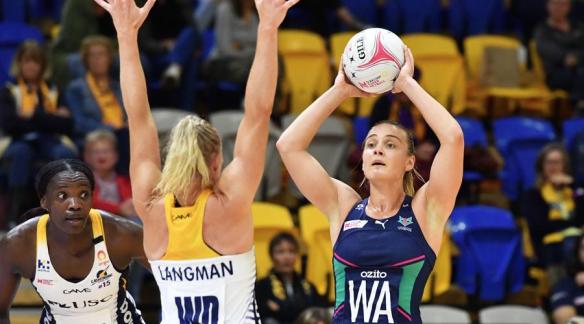 The Melbourne Vixens have sounded a warning to the rest of the Suncorp Super Netball competition after defeating the Sunshine Coast Lightning 63-51.

The Vixens were in the unusual position of hosting the Lightning at USC Stadium on the Sunshine Coast but the Melbourne club made themselves at home with another classy performance.

The two teams had yet to taste defeat heading into the top-of-the-table clash but the Vixens set up their third successive win with a dominant opening half, building an impressive 15-goal lead by halftime.

“It definitely didn’t feel like we were up that much,” Vixens co-captain Kate Moloney said about her team’s strong start.

“We knew the Lightning were going to come hard at us, they’re a super quality team but I’m really proud of our girls to be able to push it out all the way to the end.”

The victory was a fitting result for Moloney as she joined current teammate Tegan Philip and Bianca Chatfield as the third Vixen to play 100 national league games.

The reliable midcourter took the points in her match-up with Lightning captain Laura Langman, claiming player of the match with 22 circle feeds and 13 assists, while Jo Weston was a standout in defence for the Vixens.

The Vixens burst out of the blocks with nine of the first 11 goals of the game but the Lightning’s attack started to flow when Steph Wood shifted to goal shooter and Cara Koenen cashed in on a Karla Pretorius intercept to reduce Melbourne’s lead to three.

But Caitlin Thwaites drained a Suncorp Super Shot on the siren for a 16-11 advantage and the Vixens kept rolling with an 8-2 start in the second term before Thwaites and Tegan Philip combined for four super shots in the rebel Power Five period to go into halftime ahead 34-19.

The Lightning managed to reduce the margin to single digits at stages of the third and fourth quarters but the Vixens had all the answers with Thwaites, Philip and Mwai Kumwenda each playing their part to keep their attack on song.

Both teams are back in action on Sunday with the Lightning hosting the undefeated NSW Swifts and the Vixens aiming for their fourth win in a row against the Adelaide Thunderbirds.

Netball is Australia’s most popular women’s sport catering to all ages. Today nearly all levels of the sport get to play on premium Timber Sports Flooring, whether it’s at the local school, sports centre or regional stadium.

Call now to make an appointment for a virtual meeting during lockdown on 03 9467 6126 or leave your details here for a prompt reply.

Ensure your facility is maintained, ready to go in September when the current restrictions are eased.